Drivers for the potato industry include rising operational costs for growers and processors, and weather. 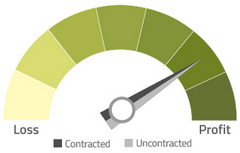 Cool temperatures and rain in the Northwest have slowed potato growth and created ideal conditions for late blight, one of the most serious potato diseases. Producers expect potato harvest to be 10 days behind normal harvest schedule. The Washington State University Plant Pathology Department forecasts a 72%-99% probability of late blight in the Columbia Basin and Yakima Valley. Luckily, in late June no late blight has been detected yet. Producers can protect plants from late blight with fungicides, minimizing the time that potato leaves are wet, and removing volunteer potatoes.

Northwest potatoes will be in high demand after an existing short supply of fry quality potatoes in the Northwest led processors to ship in raw potatoes from Maine in March. Tight potato supplies from the 2021 crop have caused prices to soar for any remaining open market Russets and will support high prices when the new crop comes to market.

In Idaho, prices for remaining Norkotahs have doubled from a year ago. For twelve consecutive weeks, Idaho Russet Burbank table potato grower returns rose to $12.21 per cwt, $6.41 per cwt higher than last year. The same is true for the Columbia Basin where open potato prices tripled in mid-June compared to the prior year.

Due to lower potato inventory from the small 2021 crop, Northwest fryers are running below capacity. Processors used 2% fewer potatoes than the previous year. Early in the year, fryers were eager to get any existing open potatoes, even at elevated prices, as local potatoes are still cheaper than the cost of transporting potatoes from other states. Even with the possibility of strong yields, processors will likely struggle to rebuild dwindling inventories and will pay higher prices for open potatoes.

Farm operational expenses and packaging costs are increasing. The North American Potato Market News reports that the cost to grow potatoes is forecasted to rise 15%-20% in 2022, driven by increases in fertilizer, fuel and labor expenses. Once the potatoes have been harvested, packing costs are projected to escalate 47% higher than pre-pandemic prices. The combination of greater growing and processing costs supports higher retail potato prices.

Restaurant sales are a proxy for fresh, fry and other frozen product demand. Potato demand has faced considerable challenges over the past two years as COVID-19 demolished restaurant sales. After a sharp sales rebound in late 2021, the Omicron variant spiked, reducing sales again. Restaurant sales face a new challenge as inflation hits consumers’ wallets, reducing purchasing power. Prices for food away from home increased 11.9% year over year. In an inflationary environment, total restaurant sales often decline as consumers reduce dining out frequency and switch from fine dining to casual dining.

Potato sales to the food service industry will likely decline as inflation rises. High inflation in the past has caused potato sales volume to drop, hurting fine dining establishment sales the most. Reductions in restaurant patronage often is followed by sharp falls in the volume of frozen potatoes sales. In 2020, potato sales fell 7.1% year over year largely driven by declines in consumers eating out. As rising inflation continues, it is likely that potato sales will decline.

Trade
Potato imports from September 2021-April 2022 increased 8.6% year over year. Following a year of consistent annual growth across all import categories, 2021-22 potato import growth is mixed and largely dependent on category. The dried, flour and meal imports declined the most, down 38.1% year over year. Frozen potato seasonal imports saw the greatest increase, up 221.7 million lbs. (a 15.9% increase) in the 2021-22 marketing year. Gains in U.S. frozen potato volumes are driven by increased Canadian imports, up 26.7% year over year.
Potato Imports by Volume, 2021-22 Market Year (September-April)

Seasonal exports for the 2021-22 market year declined 4.5% from the previous year. Dried, flour and meal exports had the largest seasonal gain, exporting 34.5% more year over year. South Korea and Japan drove export growth for the dried, flour and meal category. Both countries doubled seasonal imports, importing more in the first eight months of the marketing year than they did in the previous year.

The U.S. total frozen potato inventories for May increased 56.9 million lbs. from 2021 to 2022, up 5%. This nationwide growth was driven primarily by the East North-Central, West North-Central, and West South-Central regions. Collectively, these three regions increased potato stocks in warehouses by 67.4 million lbs. compared to the previous year, stabilizing losses in other regions. Pacific region frozen potato inventories were down 4.3%, driven primarily by decreases in french fry inventories. The Mountain region’s french fry inventories in cold storage rose by 6 million lbs., a 3.9% year-over-year increase.