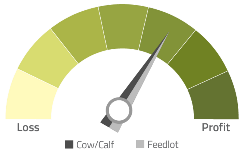 Rising feed costs have placed mounting pressure on cattle producers’ profitability. Producers who rely on purchasing hay and feedlots that buy grains face the greatest headwinds. Anecdotal reports suggest that Northwest producers will need to sell 500-600 lbs. calves for at least $2 per lbs. to make a profit. Feeder cattle prices have risen, steers weighing 550-600 lbs. are being sold in the $2.00-$2.20 per lbs. price range. Price increases are expected to persist with the national average feeder steer price projected to increase 22% by 2023. Yet, producers may still find that higher cattle prices aren’t enough to cover increases in feed and operating expenses.

In Oregon, late May rains improved pasture conditions and producer sentiment. Pastures received 3.0 inches of rain in the month of May, more than double the normal amount. However, the excess moisture likely isn’t enough to fully eliminate drought conditions. Even with a 120% snowpack and timely rain, reservoirs are low and 13% of Oregon pastures in late June are in poor condition. While nowhere near as severe as 2021 droughts, two years of dry conditions will pressure Oregon cattle producers’ profits with increased risks if pasture conditions worsen during the summer.

Montana’s pastures have also improved significantly from 2021, yet 38% of pastures were rated as being in poor or very poor condition on June 27. Cattle producers in Montana and Oregon will face many of the same hardships as they did in 2021. Poor pasture conditions will force producers to choose between purchasing expensive hay (up 51% from 2021 prices) or further liquidate an already constrained cattle inventory. Producers who can maintain their operation with minimal liquidations will benefit from capitalizing on higher future feeder cattle prices.

Demand
Domestic beef and veal prices have experienced the third largest price increase of any food category, up 14.3% year over year. Beef consumption has remained strong despite rising prices. Retail beef disappearance rate (annual U.S. beef consumption per capita) for 2022 is 59 lbs. per person, up 1.2 lbs. per person from 2019. However, increased domestic demand is not expected to last into 2023.

Demand is working in strong favor for cattle producers. Consumer demand has been strong in the first half of 2022, unaffected by higher prices. The U.S. had record exports in the first half of 2022 and trade will likely remain strong throughout the year. Even with anticipated increases in 2023 cattle prices, a tight cattle supply will be the limiting factor for declines in domestic beef consumption and exports. 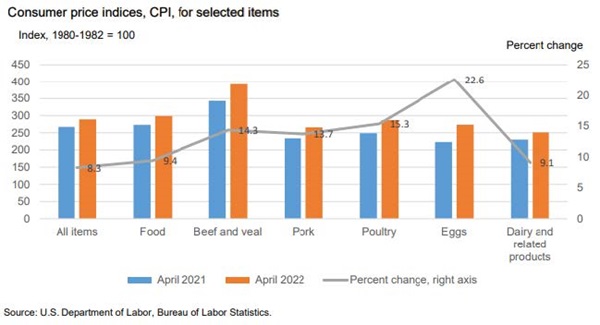 Supply
Two years of widespread drought in the U.S. has significantly impacted the cattle industry. Pastures have deteriorated, with national pasture conditions in mid-May being the worst on record. Expensive hay prices and less-than-ideal forage conditions have increased the rate of feedlot placements and lighter cows are being sent to feedlots. 2022 had the highest May slaughter rate in the past 25 years with 12 million cattle on feed (in feedlots) as of May 1. The same was true for June which had the highest recorded number of cattle on feed (this metric was first measured in 1996) with 11.8 million head. Both calf supplies and fed steers will contract in 2023 due to higher 2022 placement rates.

The USDA forecasts that beef production will fall for a second consecutive year with 2023 beef production decreasing by 6.8% to 26 billion lbs. The shrinking national herd will reduce domestic beef production supporting higher beef prices in 2023. Fewer cattle will increase cattle producers leverage to retain greater profits. Feeder and fed steer prices are projected to increase to $1.98 per lbs. and $1.41 per lbs., a 22% and 9% year-over-year increase respectively. Retailers and packers will face margin implications from smaller cattle herds.

Accelerating feed costs will create headwinds for cattle producer and feedlot profits. Fall corn prices are forecasted at over $6 per bushel ($1.78 higher than the 10-year historical price) with the USDA season-average corn price of $6.75 per bushel. Many grains analysts believe that corn prices will likely lean towards $6.30 per bushel by December. The shift from record prices expected in May to good, but significantly lower, prices in June was largely driven by improvements in corn crop after a slow planting start. Hay prices are also expected to remain elevated (51% higher year over year) supported by fewer hay acres planted in the Northwest, lower on-farm stocks, and delays in first cuttings from intermittent storms.

On June 11, temperatures in western Kansas reached over 100 degrees Fahrenheit and humidity was as high as 35% with little relief for cattle as temperatures remained elevated during the nights. The five-day heatwave killed at least 5,000 head of fat cattle in feedlots. Supplies in the near-term won’t be too heavily affected with less than 1% of weekly slaughter cattle impacted. However, fed cattle weights were impacted by the heat with a 2% decline since early May, double the decline experienced in 2021. Heat stress can set in when the Temperature-Humidity Index (THI) is above 80 degrees Fahrenheit and recent fed cattle weights have declined noticeably. It’s very likely that the Southern Plains will see further declines in fed cattle weight from the prolonged heat wave.

Plans to construct a $1.1 billion meat packing plant in Rapid City, SD, were announced in late May. Once completed, the proposed packing facility would be the largest in the nation, harvesting 8,000 head of beef and bison per day. Construction on this project is scheduled to be completed by 2026. The facility management has stated that they intend to increase competition in the meat processing industry through greater incorporation of robotics.