The sugar beet industry is unique in the world of agriculture. Private companies and cooperatives buy sugar beets from growers and process the beets into various sugar products for industrial and consumer use. The primary product of sugar beet processing is white crystal sugar, with byproducts including sugar syrups, molasses and beet pulp.

The two primary sugar beet growing regions in the Northwest are in Southern Idaho and Eastern Montana. However, sugar better are grown is Oregon and Washington as well.

Production
The United States ranks sixth in global sugar production, following Brazil, India, the European Union, China and Thailand. Unlike most sugar-producing countries, the United States has highly developed industries for processing both sugar cane and sugar beets. Sugar cane is grown in tropical or semitropical climates, while sugar beets are grown in a wide variety of temperate climates including the Northwest.

Southern Idaho and Eastern Montana are the primary production areas in the Northwest. 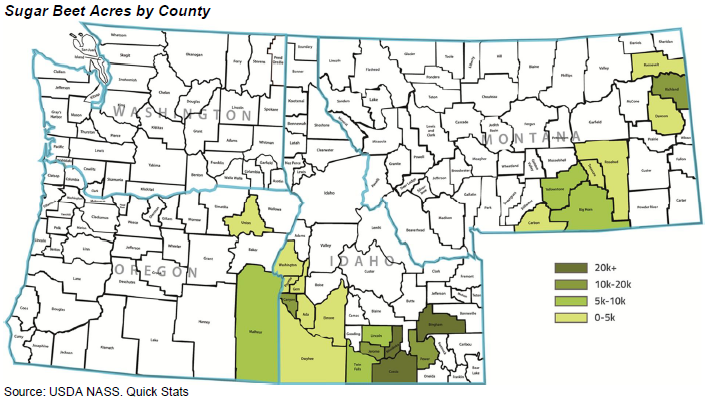 Sugar beets are the first crop planted in the spring (generally April), and the last crop harvested in October. Early planted beets have the highest potential yields but are susceptible to frost damage. Plants are grown in corrugated (or furrowed) fields irrigated by flooding or overhead sprinklers. During harvest, beets are topped (removing the leafy portion of the plant) and then dug from the ground using specialized equipment.

Once sugar beets mature in October or November, the grower harvests the beets. The beets are transferred into trucks and delivered either directly to the processor or to a beet dump. Owned or managed by a processor, a beet dump stores beets from many growers for later processing. Independent trucking companies haul beets from beet dumps to the processor.

The processor washes and slices the beets and extracts the sugar. From the extract, a variety of branded and industrial products are produced including granulated sugar with various crystal sizes, brown sugar, powdered sugar and liquid products.

Finished sugar products may be shipped in 50-pound bags, FIBC bulk bags, by bulk trucks or bulk rail. A large portion of sugar production is marketed to bottlers, canners and other food manufacturers. Branded consumer products are packaged in a variety of sizes.

By-products include food- and feed-grade molasses, wet or dry beet pulp and betaine. These products are primarily used as animal feed. 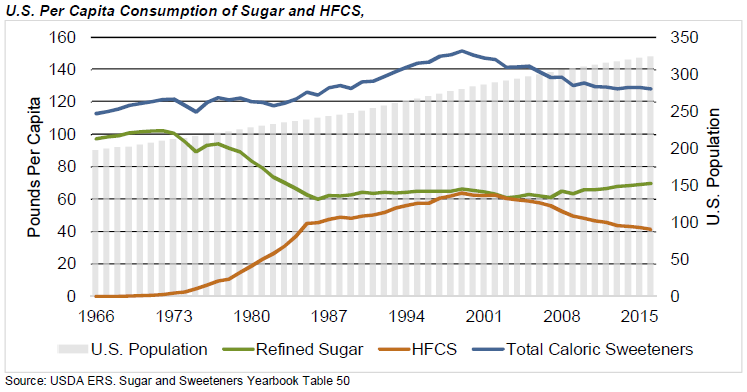 Sugar beet production and growers' returns have generally shown positive results since the introduction of a genetically enhanced seed resistant to Roundup® herbicide. This seed requires less labor and agricultural chemicals. After several years of field trials, Roundup Ready® beet seed was approved for use in 2008 and received non-regulated status by the United States Department of Agriculture's (USDA) Animal Plant Health Inspection Service (APHIS) in 2012.

Several large food companies, most notably Hershey's, have committed to eliminating GMO (genetically modified organism) sugar from their products. This has created a varying price difference between beet and cane sugars.

The loan rate is 24.09 cents per pound for refined beet sugar.

Each year, the USDA assigns each sugar processor a share of the anticipated U.S. sugar market. The allotment determines the amount of sugar each company is allowed to sell in a year. Even if a company over-produces sugar, they are not a not allowed to market sugar in excess of their allotment. Excess sugar must be stored and sold at a later date.

The USDA ensures that U.S. growers supply a minimum of 85 percent of domestic sugar demand. The agency accomplishes this by first estimating the demand for sugar, and then limiting sugar imports. Sugar imports are controlled using tariff-rate quotas, which are import taxes that increase in stages as sugar imports increase. At high tariff rates, imports become uncompetitive in the domestic market.

Free Trade Agreements
The U.S. restricts import quantities based on a calculation of the supplies needed to fill U.S.
demand.

The main challenge to U.S. policy comes from sugar imports from Mexico, which enter duty free under the terms of the North American Free Trade Agreement (NAFTA). As of 2015, sugar imports from Mexico are constrained from entering the United States as a result of an antidumping and countervailing duty case initiated by members of the U.S. sugar industry in 2014. The terms of the agreement between the U.S. and Mexico limit the price at which Mexican sugar can be shipped into the United States.

Many countries around the world subsidize their domestic sugar industries. Support can be in the form of domestic market controls, import controls and export assistance. A second layer of backing also exists in the form of direct financial aid and indirect long-term support.

Several countries around the world implement export subsidies or single-desk selling (sales by a monopoly marketer of a product with multiple suppliers). Colombia, the EU, Guatemala, India and South Africa use these market controls.

Appendix A
Best Practices
To survive in competitive industries, sugar beet producers must focus on many business aspects at once. Basic production factors such as planter spacing, irrigation timing and weed management are necessary to grow a good crop, but additional actions can help ensure long-term viability in an industry and even provide a competitive edge.

Production
Sugar beet producers and industry specialists have worked closely on developing practices and technologies that will drive increases in yield and/or quality. Best practices in production include:

Growers continue to see savings with Roundup Ready seed because it reduces hand labor, the amount of chemicals applied to a field and the number of tractor passes through a field. While growers are saving money with the new seed, some of these savings have gone to pay for increased technological fees associated with patented seed.

Cost Containment
Shifting economic conditions have contributed to changes in cost expectations, but managing costs
remains a critical component in guiding an operation toward profitability. Best practices in this area
include:

While the adoption of various technologies is a proven way to cut production costs, it usually requires a significant capital investment. Growers should perform a cost-benefit analysis to determine whether the capital investments provide the increased return to make them viable and if the size and scope of the capital investments are sustainable on a long-term basis with commodity prices at a level that is more in line with historical performance.

Long-term success requires that sugar beet producers not only be superior growers, but also sound business managers who proactively and creatively manage production expenses, labor needs and marketing issues, and position their operations solidly within lending guidelines for their respective industries.

Appendix B
Glossary
Beet dump/yard: A temporary, physical storage location for sugar beets prior to transportation into a processing plant

Juice: liquid extracted from sliced beets that is further refined into crystallized sugars

Pulp: The portion of the sugar beet that remains after the sugar has been extracted Roundup® Ready beet seed: genetically modified beet seed engineered with resistance to Roundup® brand (glyphosate) herbicides for weed control in the growing crop Single desk selling: A monopoly marketer and buyer of a product with multiple suppliers

Sugar Lime: lime used to purify sugar during processing, a co-product sold as a soil amendment

Tailings: Leafy tops and chunks of sugar beets separated prior to processing