Dairy is an important commodity in the Pacific Northwest, where the climate, land and available feed draw dairy producers to the region. Dairies supply cooperatives and other processors with raw milk. Cooperatives and independent processors then bottle milk and make a large array of dairy products such as cheese, yogurt, butter and powdered milk. These products are then sold locally, nationally and globally. Nationally, Idaho ranks fourth in milk production behind California, Wisconsin and New York; Washington state ranks tenth and Oregon nineteenth. Globally, the U.S. ranks second in milk production behind the EU. 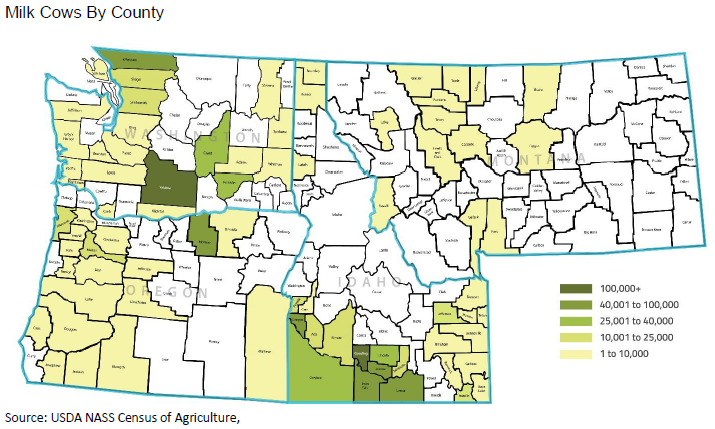 Northwest Dairy Production
Idaho
In 2017, cash receipts from dairy products produced on Idaho farms amounted to $2.4 billion. Dairy ranked as the largest single sector in the state's agriculture industry. Idaho is home to around 500 dairy operations, with an estimated 600,000 milk cows. The majority of these cows (70 percent) are located in the Twin Falls area, also known as the Magic Valley. The Treasure Valley, located in the Boise area, is home to more than 15 percent of Idaho's milk-cow herd. The state average annual milk per cow was 24,378 pounds in 2017, compared to 9,793 pounds in 1970.

Idaho dairies produced 14.6 billion pounds of milk in 2017. The majority of Idaho's milk production goes toward cheese manufacturing. Surpassed only by California and Wisconsin, Idaho is the third-largest manufacturer of natural and processed cheese in the U.S., producing more than 959 million pounds of cheese in 2017.

Washington
Dairy products represent the second-largest agriculture sector in Washington, surpassed only by apples. Dairy products accounted for $1.1 billion of receipts in 2017. Washington ranks 10th in the U.S. in terms of total milk production. Washington ranks eighth in the nation in milk cow efficiency, with 23,818 pounds of milk per cow per year. In 2017, total milk production in the state was 6.5 billion pounds. Washington has approximately 465 dairies with an estimated 275,000 dairy cows as of 2017. The largest dairy county, Yakima County, has 38 percent of Washington's cows, and Whatcom County is the second-largest dairy county with 17 percent of the state's milking herd.

Oregon
The dairy industry in Oregon produced 2.5 billion pounds of milk in 2017, ranking 19th in the country in total production of milk products. However, Oregon ranked 31st in per-cow production at 20,395 pounds of milk per cow per year. Morrow County in Northern Oregon contains 33 percent of all milk cows in the state. Other major dairy counties include Tillamook, Marion, Yamhill, Polk and Klamath in descending order by herd size.

Value Chain
The dairy value chain involves production, transport, processing, packaging and marketing. In the Northwest, an independent company or a vertically integrated business can conduct each of these steps. Production Livestock and feed are the main inputs for dairy production. Heifer calves, springers (heifers close to calving) and cows are or will be the milk producers. Bull calves are generally sold as "day-old" calves and raised as beef animals. Because most dairies use artificial insemination (AI) techniques, bulls are kept only to breed cows when artificial insemination is unsuccessful.

Dairies have two options for sourcing cows. They can raise heifer calves born on farm to maturity or they can purchase mature cows or springers. Once a cow or springer freshens (calves and begins producing milk), she can produce milk for approximately 305 days, with peak milk occurring during the first 100 days after calving. Average production is between 55 and 65 pounds per head per day and varies based on region, feed, breed and seasonal weather conditions.

The Magic Valley of Idaho and the Yakima Valley of Washington are two of the largest dairy hubs in the U.S., with adequate feed and water supplies as well as moderate and dry weather conditions making them excellent dairy regions. In the Northwest, production tends to decrease in winter months as cows dedicate more energy to staying warm. Higher-quality feed rations can increase production levels, as can cow breed. Holsteins, for example, produce significantly more milk than Jerseys.

Feed is a key component of milk production. Rations for lactating dairy cows are formulated based on crude protein and net energy for lactation. To achieve maximum production, rations are also balanced for effective fiber, non-structural carbohydrates, ruminal un-degraded protein, soluble protein and other nutritional characteristics of the feed. Alfalfa hay and protein meals (soybean, canola and cottonseed meals) are the major sources of protein. Grain and silage - both corn and haylage - are sources of energy and protein. Adequate levels of minerals are also important. These ingredients are fed to cows as a total mixed ration (TMR). The majority of dairy rations consists of alfalfa hay and corn silage. Pasture-based dairies are still common but tend to be smaller and provide mixed rations during the winter.

Dairies have several sources of income; milk sales account for the largest portion of revenue. The sale of cull cows, heifers and bull calves also contributes to dairy income.

Small creameries may be vertically integrated dairies or have a close marketing relationship with a dairy. These processors bottle milk or make relatively small batches of artisanal dairy products, such as cheese, which are generally marketed to consumers near their facility.

Co-ops process and market a significant amount of milk in the Northwest. These processors source milk from member/owner dairy farmers and use the milk in a wide array of products. Through their product mixes, co-ops may differentiate themselves through two marketing streams. The first is branded consumer products, such as fluid milk, cheese, butter, cottage cheese, cream cheese and ice cream, which are marketed widely to consumers through retail 4 outlets. Products may be packaged under the co-op's brand or co-branded with another company. The second marketing stream is dairy ingredients, primarily milk powder and cheese. Co-ops sell these commodities to food manufacturers who in turn make value-added products.

Private processors purchase milk from co-ops and directly from producers. Processing facilities are generally specialized (a cheese, yogurt or powder plant) as part of a geographically diverse product mix.

Dairy producers receive varying milk prices depending on the milk components (fat and protein) and the specific contractual agreements established with the bottler or processor. The milk price includes adjustments for component content and quality. The baseline for component content in the industry is 3.5 percent butterfat and 3 percent protein.

Milk quality is essentially a measure of overall herd health and management as expressed by somatic-cell count, which indicates the proportions of bacteria in milk.

Dairies generally receive a price premium when tests of their product confirm butterfat content of 3.5 percent or more. The composition of feed rations can increase butterfat levels, as can cow breed. Jerseys, for example, produce significantly more butterfat than Holsteins. Dairies may also receive premiums for product with somatic-cell counts of 200,000 or less per milliliter.

Milk marketed under the Federal Milk Order is priced in one of four categories: A blend price is paid to producers in a market area according to the pooled government order. The pool price is based on a weighted average price of Class I, II, III and IV milk use within the milk-order boundary. In Washington and Oregon, which are Federal Milk Order states, milk prices are based on a blend of all milk classes.

For example, the blend price paid in Washington and Oregon has been based on a use of 29 percent Class I, 7 percent Class II, 37 percent Class III and 27 percent Class IV milk. The portions fluctuate each month based on use. In broad terms, states that market under the Federal Milk Order receive higher prices than dairies in Idaho or California due to the upward pricing influence of fluid milk. However, the reverse is true when cheese prices are high relative to other milk classes. In Idaho, the milk price is calculated according to cheese yield, or a blend of Class III and Class IV prices, because the milk is generally purchased for the components needed to make cheese.

New Zealand is the largest exporter of dairy products followed by the EU and the U.S. Australia, Belarus, Argentina, Canada and the Ukraine are minor dairy exporters. Export demand in international markets continues to be a significant driver for the Northwest. Monetary exchange rates can have significant impacts on dairy markets.

Livestock Improved breeding protocols and the use of sexed semen have created an abundance of highquality heifers in replacement programs. While a cull rate of 35 percent or more might have been alarming in the past, it is more typical today as the consistent supply of heifers is allowing operations to maximize efficiencies and still maintain herd size.

Robotics Dairy production is labor intensive and heavily dependent on low-cost labor to support growth. Historically, the U.S. dairy industry has relied on migrant laborers from Mexico and Latin American countries. Challenges with immigration policy in recent years have led to labor shortages and rising labor costs, and have ultimately constrained growth in key dairy-producing areas across the United States.

Robotic milking is a potential solution to the problems of rising labor costs and labor shortages. Robotic milking systems, also called Automatic Milking Systems (AMS), became widely available to dairy producers in the early 1990s and were popular in Europe before gaining popularity in the U.S.